An unfortunate case of trolling

A few years back I was part of an inquiry into ‘intimidation in public life’. It was a theme picked up by the Committee for Standards in Public Life (of which I was a member at the time) on the back of a particularly nasty set of election campaigns.

We were worried that good people were being deterred from entering politics due to the wall-to-wall trolling which was impacting on families, businesses and supporters as much as it was the intended target themselves. We tried our best to find that line between vigorous campaigning and deliberate intimidation. There were some obvious culprits, and social media platforms themselves were reluctant to take responsibility for what is on their very lucrative sites - as we felt they should.

It was the case then, as it is now, that people should be able to express their political views without fear of any kind of public ‘pile on’ or targeted abuse. So imagine my surprise recently when such hatred spewed from the Twitter account of a certain Dr Penberthy - the Bishop of St David’s no less.

In a sequence of over 200,000 messages (yes, that is true) she let rip at members of her community who had voted for Brexit, as well as all her fellow countrymen and women who had voted Conservative in recent elections.

Using the Twitter handles 'GTTO' ('Get the Tories out'), and 'FBPE' ('Follow back pro EU') - both favourites of that far left noise factory Momentum - she grandly announced that she was ‘ashamed of each and every one’ who expressed a Conservative opinion at the ballot box – forgetting (or perhaps not) that over 50% of voters in her own home county of Pembrokeshire did exactly that.

Now, I have no problem with the clergy having political views, or holding politicians to account on an issue by issue basis. The church has always done that and Bishops proudly sit in the House of Lords. But that’s a million miles from what this Bishop was doing. This was a very crude assault on views contrary to hers, at a time when the church purports to be looking for unity, tolerance and goodwill. It broke every rule in the book and left many people questioning her judgment, as well as her commitment to the sorts of values upon which the church was built and upon which its future depends.

It seems I am not alone in this view. I raised the question directly with the Archbishop of Canterbury (we have no Archbishop of Wales at the moment) and attach his letter below, along with that of his colleague the Archbishop of Bangor. I am reassured by their robust responses which go someway to repairing the damage. Dr Penberthy has herself apologised, and has asked her churchgoers to pray for her. What she seeks from them is exactly what they didn’t get from her – respect, tolerance and understanding.

What this sorry tale reminds us, is that it is fine to use public platforms to raise questions, to challenge and to highlight injustice. However, it is not ok to use them for generalised abuse of the sort that Dr Penberthy would never have countenanced directing towards citizens of different religious views or lifestyles. The fact that in her eyes Conservatives are fair game is as absurd as a similar attack on Labour voters would be – and imagine the outcry if a cleric had done that?

Even non-churchgoers look to religious leaders for some guiding principles, especially at such a trying time for our population.

They have been badly let down by the Bishop of St David’s.

My letter to the Archbishop of Canterbury:

(Original copies can be downloaded at bottom of page) 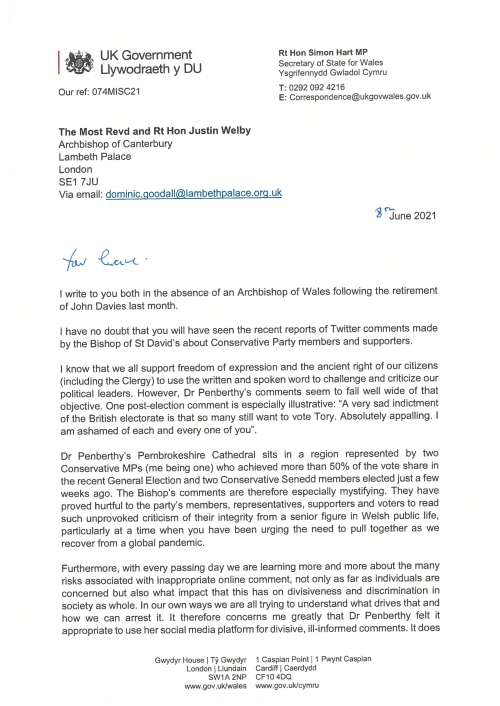 Response from the Archbishop of Canterbury: 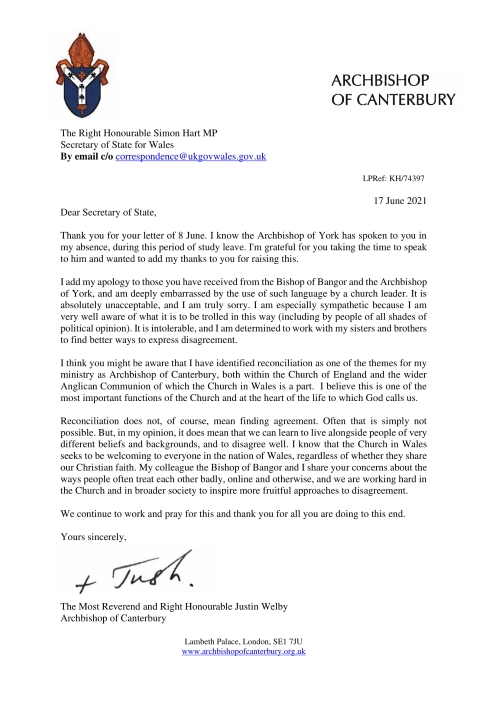 Response from the Bishop of Bangor: 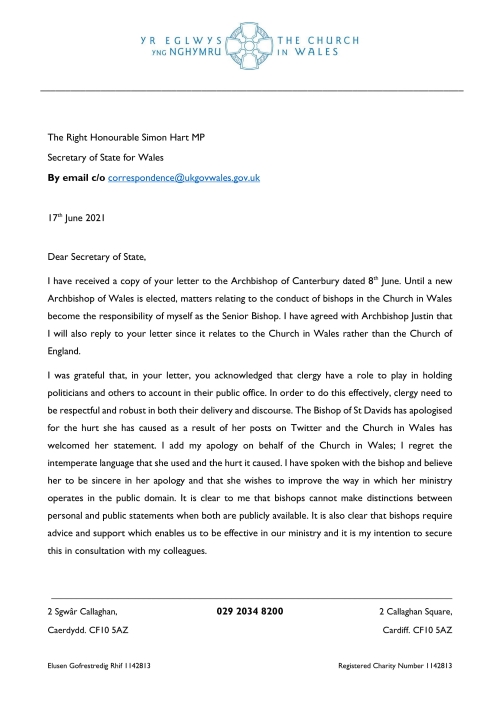 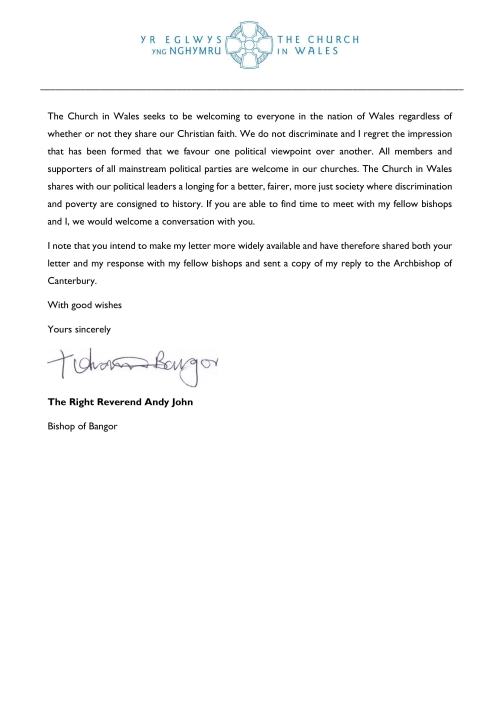