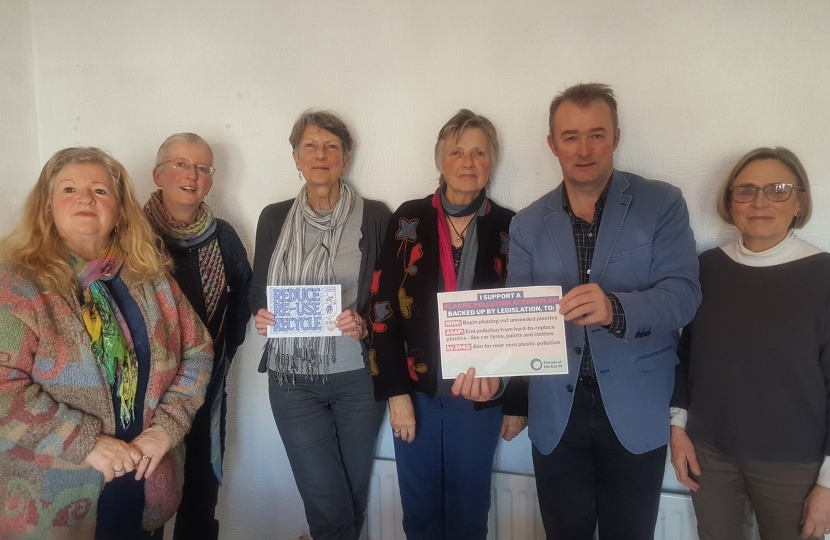 Simon Hart, MP for Carmarthen West and South Pembrokeshire, has spoken out to back a Plastic Pollution Action Plan backed by legislation to protect wildlife and human health.

Mr Hart met with local residents of Narberth and Laugharne and Pembrokeshire Friends of the Earth to hear their concerns about environmental damage caused by plastic on 22 February and supported their call for government action.

Simon Hart MP is backing the residents' call for the government to put a plan in place to tackle plastic pollution which is backed up by new laws. The action plan calls for a phase out of plastic pollution over 25 years, starting now. It also calls for work to start immediately on how to reduce pollution from hard-to-replace plastics tyres, clothing and paint.

Sir David Attenborough's Blue Planet II hammered home the tragedy of plastic pollution in our oceans. Up to 12m tonnes1 of plastic ends up in the sea each year - not far off the weight of a million London buses. The local groups both carry out regular litter picks where they encounter masses of single use plastic thrown out into our environment. Sea creatures can get tangled up in plastic – or mistake it for food. The effects can be fatal. Harmful chemicals linked to plastic have been found in species from plankton to dolphins.

Simon Hart MP said: "Everyone can help tackle the plastics crisis by making changes in their own lives. But to really make a difference the government must take action to stop the flow of plastic to our oceans. The government must adopt a Plastic Pollution Action Plan which is backed up by legislation, which aims for near zero plastic pollution by 2042."

Rebecca Cadbury, member of Pembrokeshire Friends of the Earth, said: "It's great that Simon Hart MP is supporting a Plastic Pollution Action Plan. Lots of people in the community are trying to reduce the amount of plastic they use, which is brilliant, but ultimately the plastic pollution crisis must be solved by government action. That's why we're campaigning for the government to introduce legislation to stop companies using non-essential plastic."

Simon Hart MP joins 10 other MPs across the country who are backing a Plastics Pollution Action Plan, which is the first step to getting lasting action to tackle plastic pollution.