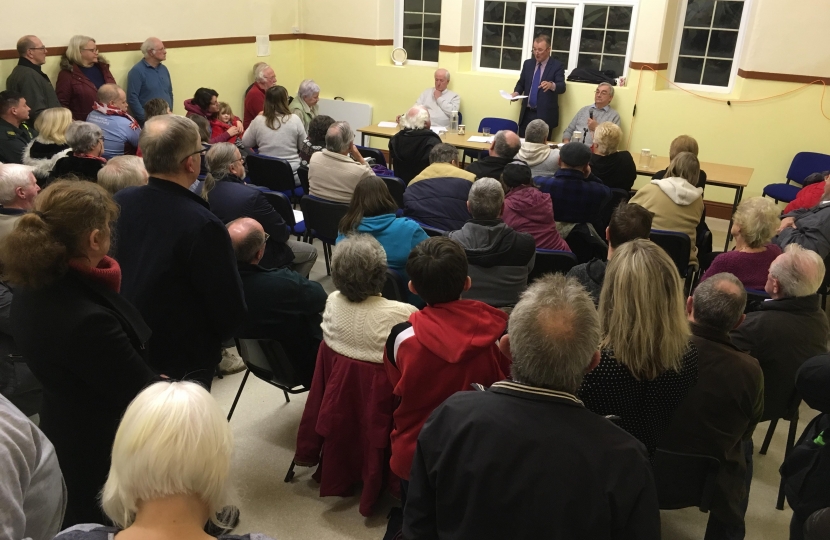 Eighty concerned residents packed out a public meeting to air concerns about an ongoing road closure that is affecting their everyday lives.

The A484 between Cynwyl Elfed and Cwmduad has been closed for three months since a fatal landslip during Storm Callum.

"Cwmduad is a tiny village and the turnout shows just how worried people are about this closure," said Mr Hart.

"I was able to give an update on what the latest news is and there was a wide-ranging discussion about the problems this is causing and the impact on their day-to-day lives."

Chief among them was how long the closure – which has resulted in a 10-mile detour – will last.

Bus driver Ken Roberts said: "I normally spend £35 a month on petrol and my journey to work in Carmarthen takes 20 minutes but now I'm spending about £80 and it's taking up to an hour to get home some evenings."

Others raised concerns about getting patients to hospital for regular dialysis, whether compensation for lost business was going to be available, lack of progress reports from the council and poor diversion signs.

"I had a group trying to visit me from Carmarthen, they spent an hour looking for the way but still could not find us and gave up," said Terry Smith of Cwmduad.

The meeting was also attended by local county councillor Irfon Jones and residents from nearby villages affected by the detour.

Julian Evans, chairman of Cynwyl Elfed Community Council said: "The road through Hermon is now like the M4, the pensioners can't cross the road to get to the shops."

Many Hermon residents said they were worried about the increase in HGVs travelling through the village and the speed of the traffic.

Mr Hart added: "The wider community has been affected by this closure, not just Cwmduad.

"We have come away from the meeting with a long list of questions, mainly for the county council - but also for other statutory bodies - and we will do our best to get answers for the community."