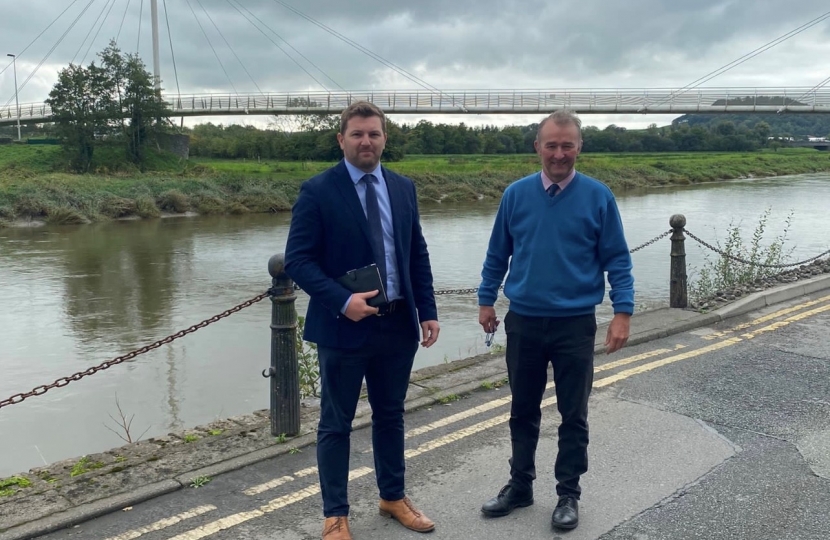 Politicians and businesses are frustrated at the lack of progress to prevent flooding in Carmarthen.

The Quay was under water three times in three months last winter and an action group met in March to discuss the way ahead.

But a follow-up meeting organised by Simon Hart MP revealed that Natural Resources Wales (NRW) is unable to take action to prevent further flooding due to Welsh Government policy.

“I am disappointed that very little has been achieved by way of progress since our last meeting,” said Mr Hart.

“The NRW repeated that Welsh Government policy was to protect homes before businesses and because this is an area that consists of shops, offices and restaurants, nothing will be done.

“What is particularly frustrating is that this was not highlighted as an immovable barrier when we  met seven months ago.”

The meeting was attended by local business owners, the NRW, Carmarthenshire Council officers and Samuel Kurtz, MS for the area.

Mr Kurtz said: “The complete lack of progress over a solution to the flooding of The Quay is undoubtedly a concern for business owners, especially as we approach winter.

“With NRW constrained by Welsh Government policy and unable to act upon the very obvious issue, I will be raising this in Cardiff Bay at the earliest opportunity to ensure the businesses on The Quay, and others on floodplains, are given the necessary support.”

After the March meeting it was hoped that the NRW would revisit previous flood plans that had been drawn up for the area and explore the option of dredging and the use of demountable flood barriers on The Quay.

“But none of this seems to be on the table,” added Mr Hart. “Businesses in this area of the town remain highly vulnerable to further flooding events despite this issue being discussed since 2005, if not before.”

It was agreed that Mr Kurtz will raise the homes-before-business flood policy urgently with the Welsh Government and that the use of demountable flood barriers would be explored.