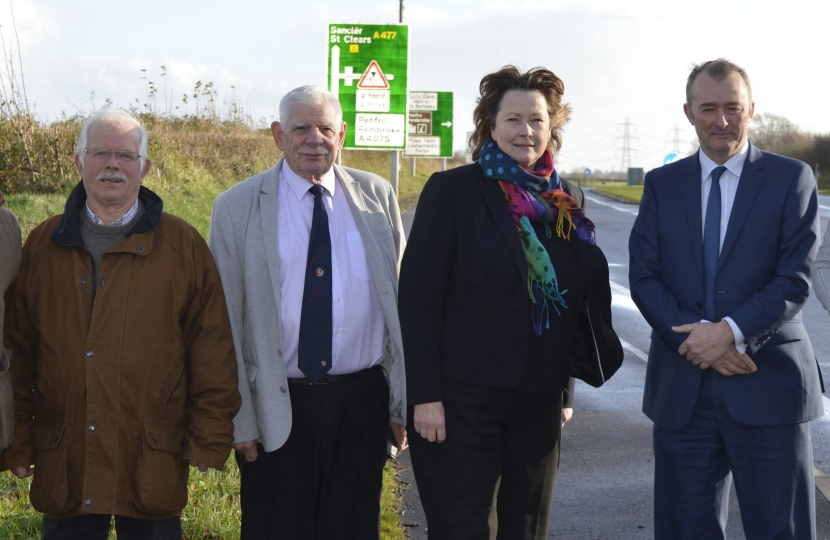 The accident blackspot at the Nash fingerpost on the A477 trunk road has seen numerous accidents and near misses over the years.

MP Simon Hart, AM Angela Burns, County Councillor Tessa Hodgson and members of Pembroke and Cosheston community councils have joined together to campaign on the issue.

"Individually we have all been writing to Welsh transport minister Ken Skates about this junction for years but when Tessa suggested that we join forces I was more than happy," said Mr Hart.

Cllr Hodgson organised a meeting between all the parties so that they could come up with a co-ordinated campaign – with a roundabout being the preferred outcome.

It was agreed that another letter is sent to Mr Skates, highlighting the roundabout preference, but also suggesting alternative, cheaper improvements.

Cllr Hodgson said: "The stretch of road either side of the Fingerpost would also be improved if there were right-turn refuges for traffic, improved signage and lighting would also help.

"It was agreed that we need more evidence of accidents and near misses and once that has been gathered we will seek a meeting with the minister."

A three-year speed limit review, covering 600 sites on all Wales' trunk roads is currently being undertaken and includes the Nash fingerpost junction.

*Anyone who has experienced an accident or near-miss at Nash Fingerpost or nearby junctions is asked to contact Cllr Hodgson, Simon Hart, Angela Burns, or Cosheston and Pembroke councils.

More than fifty residents of Pembroke Dock have contacted Simon Hart MP to express their fears about a Waste Transfer Station (WTS) planned for the Royal Historic Dockyard.