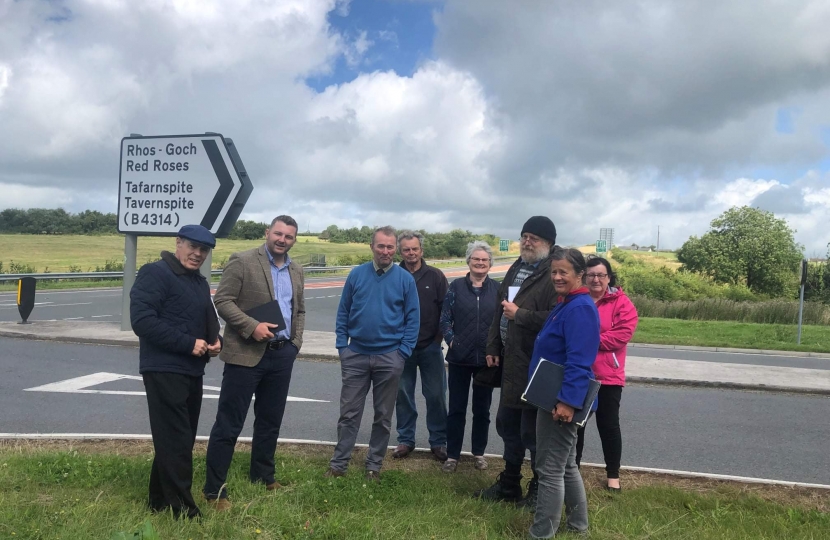 Carmarthen West and South Pembrokeshire MP Simon Hart and MS Samuel Kurtz have joined forces to urge the Welsh Government to take urgent action to make changes to the Red Roses / A477 Junction.

The site has been the scene of a number of near misses due to the speed limits that are in force on the main east to west A477 road, between Pembroke and St Clears.

Samuel and Simon met with local residents and members of the Community Council, to receive an update on the matter and discuss the steps that could be taken to encourage the Welsh Government to tackle the safety issues.

Commenting following the visit Samuel said: “I am shocked that the Welsh Government continue to ignore the community, despite their long running battle to make this junction safer, and potentially save lives.

“I have written to the Deputy Minister for Climate Change who has responsibility for transport matters and received a deeply unsatisfactory response informing me that although monitoring will continue, there is no action planned to address the junction’s high-risk design.

Samuel finished: “I will continue to work with the local community and Simon to encourage a change of policy on this issue.”

Simon added: “This junction has been dangerous from day one and many locals deliberately avoid using it.

“I am disappointed that Samuel has had the same reply from Welsh Government as was sent to me six years ago - that no real action will be taken but it will continue to be monitored.  We are monitoring it and it is dangerous!”

Mr Hart finished: “Something needs to be done urgently - at the very least a speed restriction on that section of the A477 to make turning into and out of this junction less dangerous.”