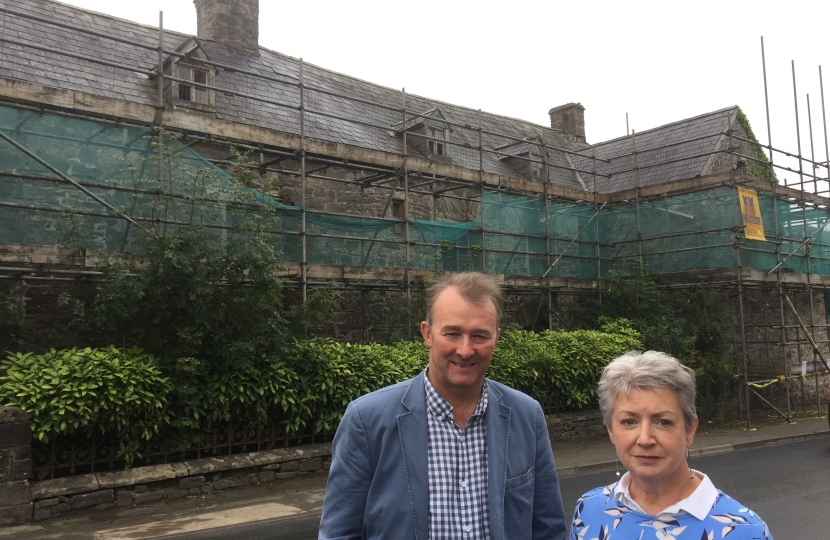 Sixty concerned residents turned out at a public meeting to come up with an action plan to save Laugharne’s historic Island House.

The Grade 2 * listed Tudor house is in a central location close the Castle in the town and has  decayed since its last occupant died 15 years ago.

Denize McIntyre of the Laugharne Newsletter organised the meeting which was also attended by Simon Hart MP, Tom Lloyd a commissioner of the Royal Commission on the Ancient and Historic Monuments of Wales, and many concerned locals.

Ms McIntyre told the meeting: “It is Grade 2 starred which means that it is of “more than special interest”, we have had many letters of support including from the Society for Protection of Ancient Buildings who said that Island House is of “national significance.”

The last occupant died 15 years ago and left the house in his will to 4 beneficiaries, however all attempts to engage them have failed and the law firm that was appointed as an executor of the will has legally withdrawn from the role.

Mr Hart said: “This building is in a very strategic spot in the middle of the town and it has been so sad to see it rotting before our eyes.  Denize has done a huge amount of work on this issue and its great to see the amount of support for the campaign.  We need to keep on at the county council to make sure that they take responsibility for this building.”

Highlighting the importance of the house in terms of Welsh architecture, Mr Lloyd said:

“We have got to save the only obvious historic building that’s within the circumference of the Castle.”

A repairs notice was issued by the County Council in 2013 and scaffolding was placed around the building to make it safe, however this is now also starting to look precarious.

“Carmarthenshire County Council did look into issuing a Compulsory Purchase order about five years ago but for an unknown reason this was not pursued,” added Ms McIntyre.

Mr Lloyd added: “I only wish this meeting had taken place 10 years ago but these things never happen until the 23rd and a half hour. “

The meeting heard that the best way forward was for a committee to be formed, some funds to be raised to help with costs and for the county council to compulsorily purchase the property with a view to passing it onward to a responsible person or group.


I have had a number of individual emails with varying queries and I shall do my best to answer as many as I can in this wide ranging reply. You can find my previous update here.