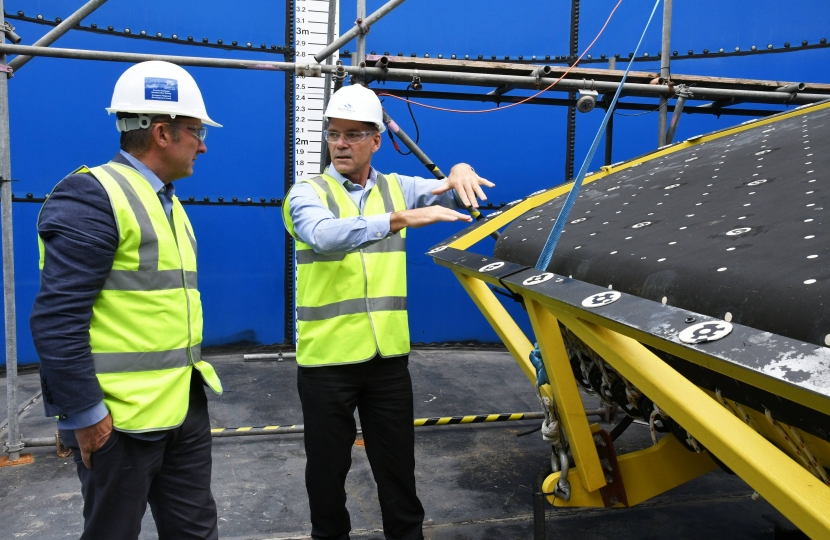 Taking time out of his busy parliamentary schedule, Simon Hart MP visited Bombora for an update on Bombora’s innovative mWave Pembroke demonstration project being conducted at Pembroke Dock. The MP for Carmarthen West and South Pembrokeshire was able to examine the test tank which supplies critical test data for the mWave engineering design team.  He was also able to see the main steel structure taking shape in the workshop at Mainstay Marine Solutions and view the Port of Milford Authority facilities supporting the ambitious project.

Having attracted significant inward investment into the region, Bombora are rapidly expanding the team and engaging the local supply chain to build their wave harnessing technology. Following the visit Simon Hart commented;

“I first visited Bombora when they had just set up in Pembroke Dock in late 2017.  There were just five staff in a temporary office, shivering after arriving in frosty Pembrokeshire from sunny Perth.

“It was great to catch up with them again and see how much they have grown and to watch a prototype of their environmentally sensitive energy project in real life rather than just a CGI version on a screen.

“Their arrival has been a massive boost to the already thriving marine energy sector in Pembrokeshire and their collaboration with Mainstay Marine is a great example of the knock-on benefits that these exciting new technologies are bringing to our county.”

Simon was keen to understand the impact that Bombora has had on the local economy since opening its European Head Office in Pembroke Dock in 2017.

Bombora has been successful in attracting private inward investment and a European Regional Development Fund (ERDF) grant via the Welsh Government, resulting in a significant boost to the local area by creating both direct and indirect employment, and through engagement with local supporting industries.

He continued, “The major contract for fabrication of the main structure has been awarded to Pembroke Dock based Mainstay Marine Solutions and we foresee many more of the supply contracts going to local businesses. We are fortunate to have a large percentage of the manufacturing capability and skills needed to deliver this project on our doorstep, which is what attracted us to Pembrokeshire in the first place”.

Bombora is mid-way through the project to design, build, deploy, test and validate a 1.5MW mWave power converter off the coast of Pembrokeshire. The mWave will be fully submerged on the sea floor and is non-disruptive to ocean users and marine life while generating electricity from the wave motion.

It’s good news that the Llandewi Velfrey bypass is at last going to go ahead, having narrowly escaped the most recent Welsh Government “review”.